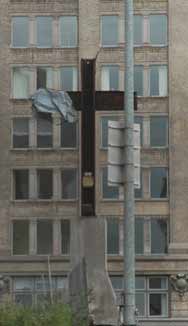 Truly replacing the World Trade Center would be impossible, but New York City is working on plans to build a single tower on the site the twin towers occupied until September 11, 2001. The original Freedom Tower and Memory Foundations complex plan has been abandoned, and a new plan was adopted. Construction is well underway for a tower to be named One World Trade Center. One World Trade Center will be the tallest building in the United States and the Western Hemisphere. Also, it will become the world’s tallest all-office building. Its spire will top out at 1,776 ft (541 m).

The height of 1776 feet was chosen as a reference to the year of American independence. The decision of how to rebuild the World Trade Center has been a difficult one in light of political and security concerns. Visitors to New York City can tour the World Trade Center site and see the early preparations being made for this monumental project. Your New York Party Shuttle tour guide will walk you over to the site and will show you artist renderings of the proposed tower.

Each of the original WTC towers had 110 stories. The heights of the towers were 1368 feet (417 meters) (tower one, the North Tower with a broadcast antenna on top) and 1362 feet (415 meters) (tower two, the South Tower with the observation deck). When the towers were completed in 1972 (tower one) and 1973 (tower two) they were the tallest buildings on earth, 100 feet (30 meters) taller than the Empire State Building.

OnBoard Tours offers tours of the World Trade Center site. The NYC Freedom tour is a quick tour that will give you a guided tour of the new 9/11 Memorial. It also includes two boat tours to get two and from downtown Manhattan. The Premium NY See It All! Tour also includes two boat cruises and entry to the 9/11 Memorial, but also adds a comprehensive tour of the top attractions in New York City. If you are looking for a World Trade Center tour, OnBoard Tours has the right tour for you.

Webmasters and E-Zine publishers should request permission to reprint by email link below.