Let’s face it: New York City knows how to do the holidays like no other city in the world.

Even before the first snowflakes fall, the city transforms into a magical winter wonderland. Skaters do figure-eights in Central Park, the Rockettes kick up their heels at Radio City Music Hall and Sugar Plum Fairies drift across the stage at Lincoln Center.

So if the Big Apple is beckoning you this holiday season, here are a few things you might want to put on your to-do list. 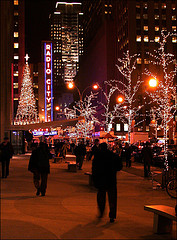 Not Just For Kids

(November 21, 2009; January 10, 2010; The New York Botanical Garden; Bronx River Parkway at Fordham Road)
The New York Botanical Garden’s Holiday Train Show is a beautiful scene of The Big Apple built entirely out of plants and natural material like seeds, bark and leaves. A few of the included landmarks are the Brooklyn Bridge and The Statue of Liberty constructed by Paul Busse. The miniature trains are also incredibly impressive works of art to view and run the familiar New York City Landscape.

(November 24, 2009-January 6, 2010; The Metropolitan Museum of Art; 1000 Fifth Ave. at 82nd St.; www.metmuseum.org)
The Medieval Sculpture Hall at The Metropolitan Museum of Art is hosting its annual Christmas tree revealing which features a gorgeous tree trimmed and decorated with 18th century ornaments and a beautifully detailed Neapolitan Nativity scene. The event will also include festive décor and seasonal music.

Hanukkah in New York City– The eight-day Festival of Lights begins on December 21, 2008.

Rockefeller Center Christmas Tree Guide– December 3, 2008 from 7-9 p.m. This is a must if you are spending Christmas in New York City.

(November 27, 2009; South Street Seaport; Pier 17, Fulton & South Streets; www.southstreetseaport.com)
Soon enough, the bright lights of New York City are going to be drowned out by the beautiful lights of the holiday. The South Street Seaport is kicking it off with a traditional tree lighting ceremony where a 50 ft. tree will be lit up the day after Thanksgiving and will also feature carolers and surrounding holiday shopping.

We hope that this page has helped you plan your stay during Christmas in New York City.